Pregnant Women Often Have Nasal Congestion, This Is Possible Cause 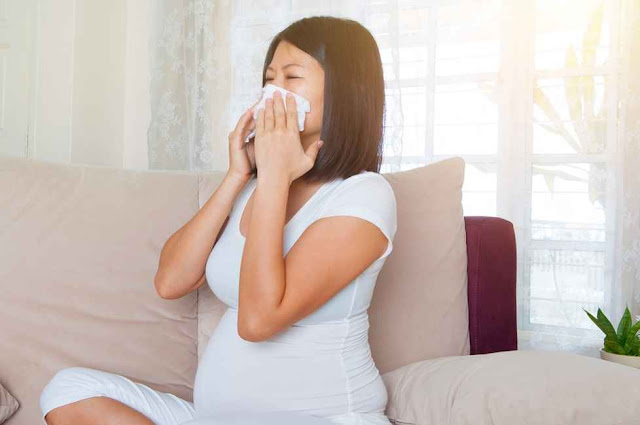 Rhinitis in pregnant women generally occurs due to hormonal changes. One hormone that has increased is the hormone estrogen. The high hormone estrogen then causes the walls of the respiratory tract to swell and trigger more mucus production. In addition, circulation of blood flow also increases during pregnancy, including in the nasal arteries. This condition makes it easier for pregnant women to experience nasal congestion. Rhinitis during pregnancy can last about six weeks or more. This condition can occur at any gestational age, although it generally occurs in the first and third trimesters. Rhinitis experienced by pregnant women is generally not caused by an allergic reaction, and will disappear by itself two weeks after giving birth. If Bumil has symptoms of rhinitis accompanied by itching of the eyes, nose, throat or ears, then Bumil is likely to have an allergy at the same time. Rhinitis in pregnant women is actually quite common, but it can risk causing health problems for both mother and baby. Especially when it disturbs the sleep of pregnant women. If this continues, this condition can interfere with the baby's chance to get the oxygen needed for its development in the womb. If so, Bumil is recommended to consult her doctor.

Some ways you can do to reduce discomfort caused by rhinitis, including:

Clean the nasal passages with a rinse of salt water mixture (saline), useful for removing mucus. The trick is to mix 250-500 ml of warm water, ¼ or ½ teaspoon of salt, and a little baking soda into a clean basin. The pregnant woman can stand in front of the sink and position her head tilted to one side. After that, pour a little solution into the palm of the hand. then put the solution into one of the nostrils alternately and throw it in the sink. Do this repeatedly, until your nose feels more comfortable. Some solution may get into the throat. However, do not worry, because this is not dangerous. Pregnant women can also clean the nose by using a similar product that can be purchased at a pharmacy. Do not hesitate also to take a warm bath during rhinitis, Mother. This is useful for overcoming nasal congestion. Pregnant women can also wash their faces with a washcloth that has been dipped in warm water to deal with nasal congestion. The use of humidifier Bumil can use in the room to sleep soundly and comfortably. In addition, sleeping with pillows piled up can also make pregnant women sleep comfortably. Doing light exercise is useful for overcoming nasal congestion. However, before doing sports, you should consult a doctor first, to find out that exercise is safe for pregnant women. Pregnant women, can also relieve symptoms of rhinitis by avoiding allergic triggers. Such as cigarette smoke, exposure to chemicals and air pollution.

Pregnant women are also recommended to maintain the cleanliness of the surrounding environment, such as the bedroom, from dirt and dust that might stick. Also avoid cigarette smoke and vehicle smoke. Pregnant women can use masks when cleaning the room and when outdoors activities. Although rhinitis during pregnancy can interfere with comfort, pregnant women should avoid taking drugs carelessly! It is recommended to consult a doctor immediately to get the right treatment. Especially if the rhinitis of pregnancy has disturbed the comfort of sleep and makes pregnant women difficult to do their daily activities.

Popular posts from this blog

Sympathetic Pregnancy, when the husband participates in feeling the symptoms of pregnancy

February 07, 2020
Using eye makeup, such as eyeliner and mascara, can make someone's appearance look more fresh. However, using eye makeup also should not be careless, you know. If not done properly, this type of makeup can cause interference with the eyes. Eye makeup is one of the makeup equipment that is vulnerable to bacterial contamination. This is what can then cause eye irritation. For that, let's, consider some safe tips for using eye makeup. Safe Ways to Use Eye Makeup The following ways you can do to use eye makeup without creating the risk of irritation: 1. Note the expiration date The important thing to note when using eye makeup is the expiration date. Mascara should usually only be used 2-4 months after opening. As for eyeliner, it is usually only good to be used no later than 3 months, especially eyeliner in liquid or gel form. 2. Avoid sharing usage with others Being close to someone might make you feel reluctant to lend each other eye makeup. However, this can increase th…
Post a comment
Read more